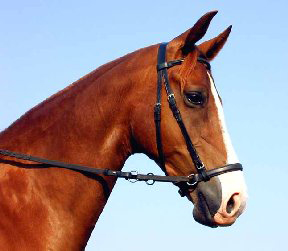 In 2005 I had been given the opportunity to test a prototype of a Dr. Cooks bitless driving bridle. Dr Robert Cook had an idea I would be open to testing the bridle as he was aware I had been using a rope halter almost exclusively since 2001 for starting colts and retraining problem horses. He knew I was familiar with driving draft horses in parades and shows.

I'm happy to say that I was able to hitch a new client's horse successfully. A horse that had never been ground driven, nor hitched to a cart. Upon meeting him and attempting to ground drive him in his bitted bridle, I was able to observe how he would throw his head up, and ignore the bit. Not a horse I would trust to carry me in a cart. I told his owner I was not comfortable with training a horse to cart if he would not listen to the bit. I told her about the Bitless driving bridle, and I asked her if she would be willing to test it with me. She agreed.

He did have a lot of good qualities that allowed me to proceed rather quickly. He had no fear of the driving lines, a person walking behind him, sounds of rocks in a bucket and no fear of cars. He gave little reaction to the first pressure applied to the breast collar from pressure added to the traces, as I applied resistance manually via two lead ropes attached to the traces, then worked up to adding a log.

After 5 one hour training session at her farm, we went off down the road. He was hitched to a rubber tire easy entry breaking cart. NO BIT! He was excellent! He stopped beautifully and with every session we noticed how he brought his head down on his own as he slowly realized, he was not going to feel the pain of a bit.

(I chose to go with an open bitless driving bridle as I don't care for blinders/blinkers.)

Dr. Cook was kind enough to give me a riding bitless bridle for my time in testing the prototype.

As of Dec 1 2013 it must be around 400 horses. From mini’s to draft horses, and everything in between. From first rides to rehabilitating buckers, bolters and horses that are prone to rearing.

I believe that any well trained respectful horse can make an immediate transition to Dr. Cook’s bitless bridle with no special training; they absolutely love not having a bit.

What about a horse that’s out of control?  In working with many problem horses, over the past 13 years of going bitless, there is not one horse that an owner could ride that I tried to fix by changing the bit, or using the current bit. This is because I know for a fact that the bit will cause way more pain than I am willing to administer to the horse. (In my ignorance I did this for years, the horse a creature that just wants to get along suffers enough at our hands).

On every horse I work with the first thing I do to fix any and all problems under saddle is REMOVE the bit. Horses that have disregarded the bit by driving through it and bolting, jigging, bucking,rearing etc.

On severe cases I prefer to transition with a double diamond hand-tied rope halter I custom fit this bridle with vet wrap to make the nose band smaller, giving me more control or leverage.  I attach two clip on reins. This allows me to give a more serious correction than Dr.Cook’s bitless bridle can do.

It may sound severe, (not as severe as what they've have experienced with a bit in their mouth.) I am firm but fair when giving these corrections, with quick flick of my wrist to the reins, then an immediate release. Sometimes these bad behaviors; head shaking, refusing to stand to be mounted rearing etc. disappear immediately because many of them are caused by previous cruel treatment to the horse’s mouth. Even if your hands are soft, the previous rider’s hands may not have been so kind. Other times it may take two or three sessions for the horse to realize the extreme pain is not going to happen anymore, and will relax/perform better with every bitless ride.

I have thought of this analogy:

Let's say going to the dentist was completely pain free, even with today's technology, I would be a little skeptical, so I make an appointment. I'd walk in a little stressed, anticipating the pain I have felt before, I sit in the chair and open wide.  I am exposing a very sensitive area - my mouth - and see a needle coming to my mouth (bridle no bit). The dentist (rider) is telling me it's not going to hurt, it's a painless shot. I really don't believe him even though we communicate in the same language! Then the drill starts up, I hang on to the chair tightly, and tense all my muscles, as I am told to relax. Wow, there is no pain; I can finally start to relax with each visit.  Eventually since I don't experience any pain, I stop tensing; it’s amazing how different my attitude will be in the future!

Give your horse a few sessions to realize things are going to be different. Work in a small arena until you are confident you have the same amount of control.

If you have any questions please feel free to contact me. I'll be happy to give you information over the phone or come out and help you transition to bitless".

I received a heads up at the end of 2016 from Carole, the former President, that the company was being sold. I have enjoyed working with the company as a bitless bridle instructor and consultant for 12 years. I will still recommend the bridle because I believe in it, and love it for retraining my client’s horses as well as using it for my own horses. I am still available for consults about retraining in this bridle.

PHS Saddlery in Colorado Springs, CO. has purchased the company. They have been making the bridle for the 17 years prior to this so you can expect the same quality product as well as the other items they carry. All made in the USA!