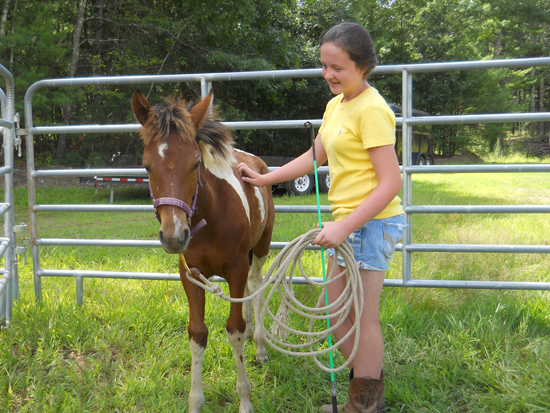 We called Cathie after bringing home a wild foal from the Chincoteague Pony Auction in Virginia. She was huge for a Chincoteague pony foal, and absolutely petrified of humans. After a little more than a week of trying to gain her trust, and having Faith slip off her halter multiple times, we decided to call Cathie and see if she could help. In less than two hours, we were able to approach Faith out in the field, halter her, and lead her without any fearful bolting or rearing.

I would recommend Cathie to anyone working with a foal or young horse. Her methods were easy to understand and helped Faith and I achieve a better start."  Mollie Brooks

To see myself and the owner work click here 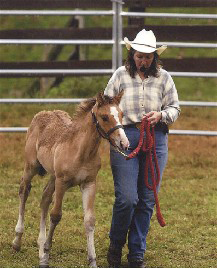 I'll teach your youngster basic ground manners to get off to a good start. He'll learn leading lessons, giving to pressure off of a halter for future cross-tying and trailer loading. Wearing a circingle so he'll have no need to buck when he's saddled his first time. I'll teach him to drop his head to give to pressure, and show you how to catch him with out tricks or grain.

We can work on picking up his feet on cue - no struggle necessary! I'll show you how to discourage nipping or rearing. If desired, we can work on simple, short longing lessons.

These are NOT in a tight circle, we only walk for starters just a a couple of laps, change of direction, halt and walk commands.

Being young is no excuse for bad/dangerous behavior. A young horse should be taught to lead respectfully after his first few days of life if he is expected to be led in and out of a stall. If he is left to grow up in a field without being handled it would be nice to teach him good manners when he's not so big. It's never too late to start. My horse Ruger was semi feral and at age 16 months had never had hands on him to be groomed or even his feet picked up. We started all that when he arrived, after the little shock of a human's hand on his body he got with the program immediatley.

These first lessons are very important and will make his future training seem incredibly easy! 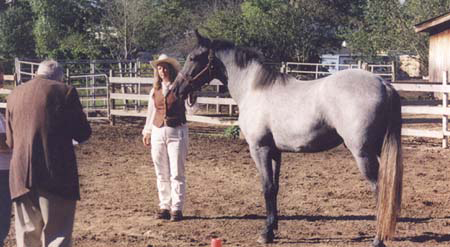 This two year old went from not being able to be led without rearing and bolting, to the best behaved horse at this "part bred" Friesian judging in just six or seven sessions. He was the youngest horse in attendance.

Yes it took much patience correction and praise as he had gotten away with too much but I was thankfully able to get him back on track.