How lucky we are to have friends from Ireland? 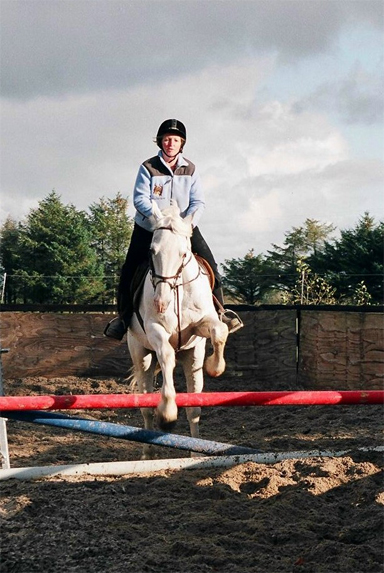 Thanksgiving week "07" My Husband and I flew to Ireland with our friends the Lamberts. I brought my Dr. Cooks Bitless Bridle just in case an opportunity presented itself. I knew Tony had sent one ahead to Ireland for his father Jack to try out. We settled into a beautiful Cabin with modern amenities on Ann and Jack Lambert's Farm in County Wexford. We walked around and visited with all the young stock. I even got to halter break a couple of foals.

Jack and Tony invited me to ride in a fox hunt, but since my track record for horse related injuries while on vacation was nothing to brag about, I declined. Instead I went along to watch the fun. Much of it was had before and after the hunt at the local pub. At least for those who were actually participating in the hunt. It was very damp, and down right raw. We sped around in little cars trying to keep up with or just sneak a peak as they raced after the hounds. one would repeatedly have to get out of the vehicle and face the elements. After what seemed like way too many hours of this I became chilled to the bone and spent a 1/2 hour stoking the fire with coal sitting as close as I could to the fireplace waiting for the riders to return from the hunt. It warmed up in a hurry as the pub filled to capacity as the riders trickled in A few were covered with quite a bit of mud. and there were quite a few tales to tell. Back at the cabin Mrs. Lambert welcomed us with a cup of tea toast and jam as she did our entire week long stay.

On a much brighter day, I rode Grange Bouncer the Lambert's Magnificent Irish Draught Stallion. A Grade A show jumper. He was actually a babysitter of a horse. He knew his stuff. Jack, Tony, Ado (a young trainer) and myself rode out to jump ditches leaving my husband Bob afoot. I was amazed with the men and their horses, and happy just to observe. Well sort of... I really wanted to jump but most of these trenches were at the bottom of steep 6 foot hills, and they were 6 feet wide. I was told I could jump Bouncer but these ditches looked quite treacherous to me. When I finally began to contemplate some smaller ones I asked if there were ditches that were smaller yet. I was informed "Those ARE the small ones". I was assured that Bouncer was an expert and would take care of me. I had no doubt he could jump the moon, the doubt was whether I would be found astride, the other side of the ditch or have to be retrieved from it. I was riding Bouncer with his bit and he was soft as butter, but I was afraid I might grab his mouth and unintentionally punish him for my lack of experience. So the following day, my mission was to gain some confidence I jumped Bouncer in a round pen to get a feel for him, the following day while riding . On my next ride I asked if I could ride in the bitless bridle so I wouldn't ruin his mouth if I tried some more jumping. Heading out to the track, I was asked to be the lead for the two young stud colts. Tony and his dad Jack were riding these boys for their first time. After warming up we galloped around it. It was quite exhilarating as Bouncer did not want to be passed by the colts. I got up the courage to jump Bouncer in the field inside the sand track. I jumped several cross rails to get a feel for him, he just flew over these little 2 1/2 foot jumps. I felt like I was in kindergarten even though I am not a jumper. I didn't want the fact that I was a horse trainer in the states even mentioned while I was in Ireland. Bouncer was absolutely amazing. I finally got the nerve to jump the tires unfortunately the picture is just a blur, but in my mind it's a clear as a bell! Thanks to all the Lambert's for a magical time in Ireland.

Below is my Husband on Bouncer (My Knight in shining armor, My own true love)

Next up is my 6 ft tall husband standing next to me on Bouncer.

Then My husband Bob watching on as I take a tiny ditch.

Then my going over the tires, I had to get up alot of nerve for that one, no sweat for Bouncer.

Very botton photo is Jack and Tony riding younsters, Jack is using Dr Cooks on his stud colt, that had only a ride or two under saddle. 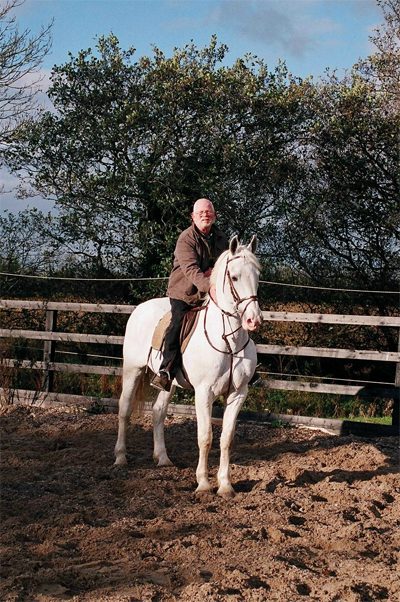 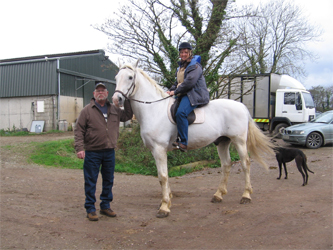 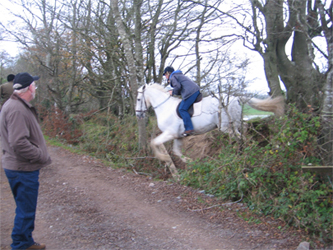 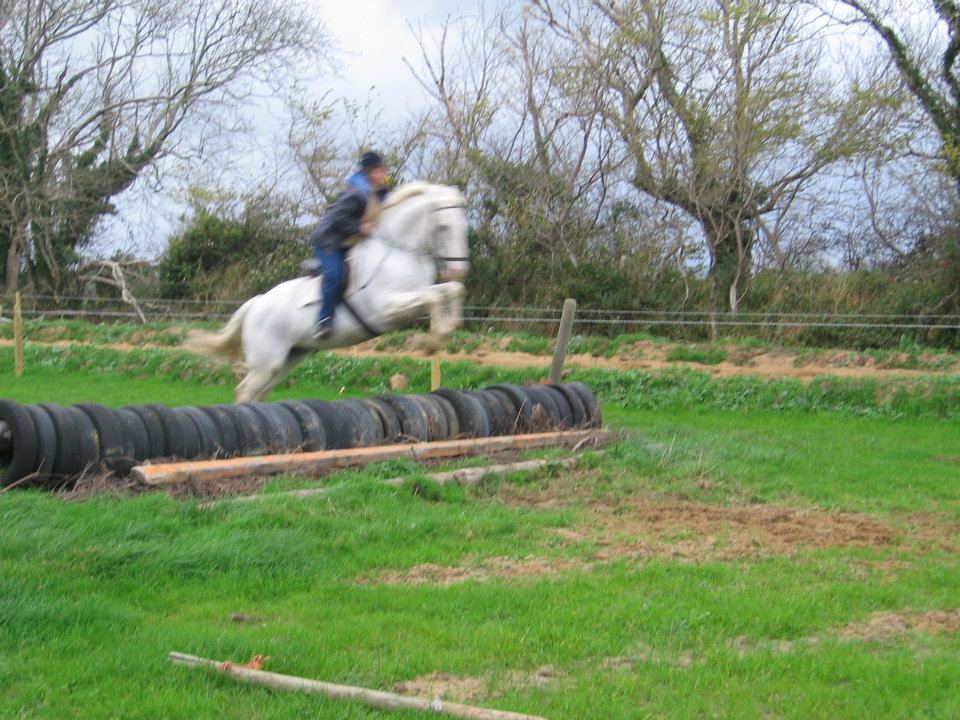 Back to Picture Testimonials